Pink Tea save you from extreme winter (snow weather)

on September 26 | in HEALTH | by Noman | with No Comments 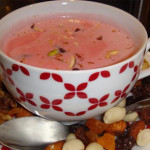 1. In a saucepan add 2 cups water, bring to boil. then add tea leaves, green cardamoms and sugar, let it boil.

2. Then add baking soda, salt, mix well. Take the pan off the stove, add cold water to it.
3. Before adding the cold water, you should see a burgundy/dark pinkish film on the surface.
4. That tells you have boiled it to the right level and the colour will be great.
5. Take a ladle, fill it with the boiled tea and blend it by pouring repeatedly.
6. You take tea in the ladle and raise the level of the ladle about 8-10 inches and pour the tea back to the pan.
7. Doing it at least 6 minutes will make a change in the colour of tea.
8. Take a strainer and strain the tea, add milk and one petal of Baadian Khataaii (star anise, if available).
9. Let it boil for three to four times and then serve in a tea pot or put it in your tea cup directly and garnish with crushed almonds and pistachio.
10. Yummy… Yummy… Yummy………..Serve immediately.

There are various chemical compounds found in green tea like: polyphenols and flavonoids alkaloids, such as caffeine and theobromine, carbohydrate, stannins, minerals such as fluoride and aluminum

White and green teas are highest in catechins concentration, while black tea has substantially fewer due to its oxidative preparation.

Catechins in green tea possess anticancer properties; it fights against “cancer in various organs, including the colorectal and liver.

Green tea contains “Branched-chain amino acids which may prevent progressive hepatic failure in patients with chronic liver diseases, and might be effective for the suppression of obesity-related liver carcinogenesis.”

Green tea drinking has recently proven to be associated with cell-mediated immune function of the human body.

Green tea also prevents dental caries due to the presence of fluorine.

Both green and black tea infusions contain a number of antioxidants, mainly catechins that have anti-carcinogenic, anti-mutagenic and anti-tumoric properties.

Tea prevents the rise of homocysteine which is known to be an important and significant risk factor for cardiovascular diseases, due to the content of vitamin M in tea. The vitamin M, which is a B complex vitamin, assists in preventing cancer and it also plays an important part in the health of the nervous system, the eyes and other systems.

Green tea contains caffeine and it has been used to increase alertness. Green tea has also been used to prevent/delay Parkinson’s disease.

Green tea is a natural antiseptic. It cures the inflamed skin, sun burn and blackish spot around the eye. It has an anti-aging property.

about the author: Noman

» HEALTH » Pink Tea save you from extreme...